Storytelling was strong in both sides of my family. My mother Johan was a daughter of the Lewis political orator and storyteller Murchadh 'An Fhionnlaigh Mac a' Ghobhainn. My father, John Burns Stephen would revert to his Doric voice whenever he met someone from anywhere near his home town of Fraserburgh, the fishing port north of Aberdeen.

I began to share inherited stories as a student in Aberdeen. Then came the storytelling cup at Kinross Festival, run by the Traditional Music and Song Association of Scotland. I was judged winner by  Stanley Robertson. This led to a review by Karl Dallas in Melody Maker:

'A red bearded poet from Stornoway carried off the much-coveted storytelling cup at Kinross Festival. His tale...combined contemporary and traditional elements.'

An Edinburgh Festival  live broadcast on Radio Scotland led to David Hearst commenting in The Scotsman:

'A Lewisman telling the stories of his people and their people before...whenever you get something genuine it never fails to make the rest look so much more frenzied in its efforts.'

Stories told at The Commonwealth Institute on the launch of my first collection of poems, Malin, Hebrides, Minches led to a comment in the Indian magazine Express by the poet Saleem Peeradina: 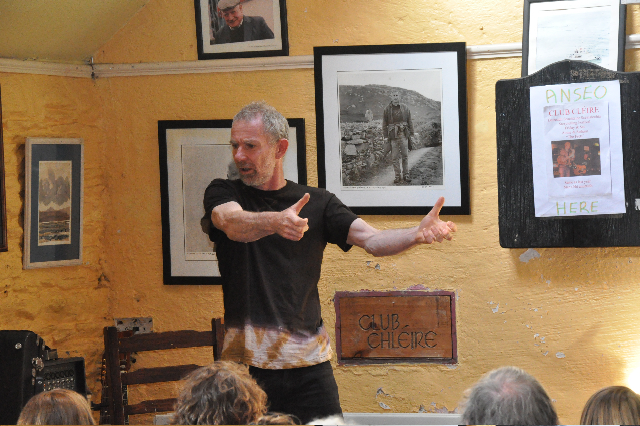 Recently I've been a guest speaker for University of Highlands and Islands and  recorded by The School of Scottish Studies, Edinburgh and The Elphinstone Institute, Aberdeen. My particular area of interest remains the folklore  of the maritme areas of Scotland. Some of these stories are retold in Western Isles Folktales (The History Press) and Waypoints (Bloomsbury).

Really I'm just as happy telling stories in village primary schools or at international festivals, though there has to be enough time for both writing and for the travels,  land and sea, which feed that. Regular appearances include the Scottish International Storytelling Festival and I've also been commissioned by The Village, CCA Glasgow and Settle Stories. There have been many collaborative performances combining projection of a visual element (provided  or edited by Christine Morrison) and the musicians, Peter Urpeth (piano), Garry Carr (double bass), Giles Perring (sound-sculpture) and Kirsty Law (singer-composer). I've also been a regular visitor to the Czech Republic and performed in France and Germany. My arrangement of a series of traditions relating to St Kilda formed the backbone of a Europe wide opera Hiort- the St Kilda Project. 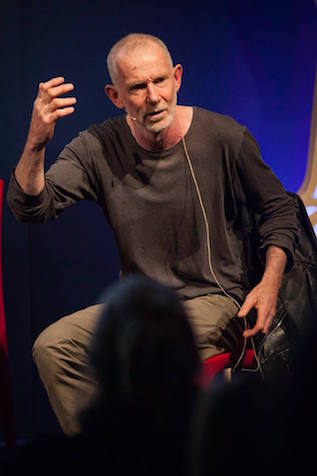 is an ongoing exchange  between Scotland and the Punjab. This has enabled travels to Lahore to exchange Scottish Island stories with those of the Punjab. That experience led to events at Lahore Literary Festival, Edinburgh Book Festival and an outreach to Lewis and Harris, in partnership with an Lanntair arts centre and The British Council. 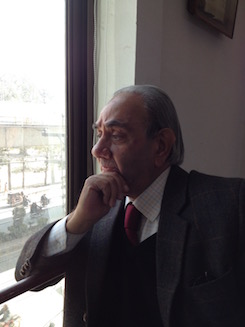 Mujahid Eshai (my new uncle) shared the telling of 'The Woodcutter's Clever Wife' at Lahore ~Literary Festival. He also outlined the role of the ballad tradition in preserving stories from the Punjab. He read me sections of a tragedy where lovers are separated in life but joined in death. It reminded me of the lament of Anna Caimbeul for her lost sailor Alein Duinn in the great Hebridean song. As we yarned, the painter Mehreen Fatima and Scottish illustrator Kate Leiper, produced a detailed scroll which was later projected at our performances 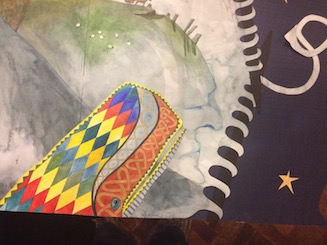 In 2017  the Scottish International Storytelling Festival fostered an exchange of stories with Peter Chand and poems with Shazea Quraishi while the singers and musicians Sarah Hayes Sara Kazmi also shared their own collaboration onstage .

Ullapool Book Festival   In 2018 Ian will return to the Ullapool festival as a storyteller rather than as poet, novelist or non-fiction writer. He will be working with a range of age-groups from primary school to care-home visits.

‘Telling a story well, he explained, is like knowing the way-points to look out for on a sea journey: as a former coastguard, Stephen will know these better than most. A spellbinding performance.’

David Robinson, The Scotsman, on Ian's previous appearance at Ullapool. 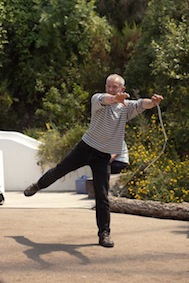 Christine Morrison’s collaboration with Ian Stephen and school pupils of the Western Isles, Acts of Trust, won the multi arts category in the first British Awards for Storytelling Excellence, 2012:

'The work produced is graced with an apparent simplicity and a deep sophistication. It also has integrity and reflects the context from which it arose, including the culture from which the stories grew and the communities grew.’ 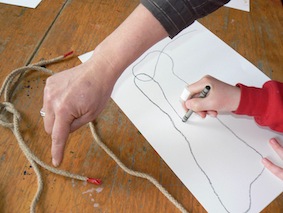 With my background in education, the sharing of stories, often in multi-arts projects, has been a large part of my working life since leaving the coastguard service to work full-time in the arts. Though I now have to allow enough time for writing extended works of prose, I have been happy to provide outreach for an Lanntair exhibitions, and for festivals such as Skye Book Festival. 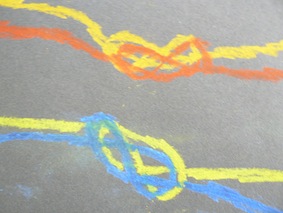 From Joan Michael, on the literary tent at Loopalloo festival:

‘Thank you so much for your great contribution to our first ever literary tent. We have had excellent feedback from audience members. One particular comment I got about your storytelling was “he just draws you right in and it’s as if you are the only person there.”’

‘Voyage is a superbly crafted storytelling experience in which narrative, song, music and evocative visuals all combine to draw us into the storytelling magic…. the perfect launch for the Scottish International Storytelling Festival 2013’,

‘This was truly an incredible journey bringing storytelling into the 21st century with style, mixing traditional tales and techniques with modern technology to great effect. Pivotal to the experience are the incredible images of Christine Morrison which are projected as a backdrop for the performers but are in themselves integral to the whole feel of the performance as they capture the varying moods of the central character in all the tales: the sea.  The stark monochrome accompaniment to tales of  drownings in the western isles gives way to startlingly bright colour for the lively re-telling of Homer’s Odyssey and the evocative image of the four birds swooping low over the waters will stay with the viewer for days.